This article defines the accepted definitions of turbocharging and supercharging. The VenomAire is technically, neither.
From Wikipedia, the free encyclopedia
Several terms redirect here. For other uses, see Turbo (disambiguation).
Not to be confused with Supercharger. 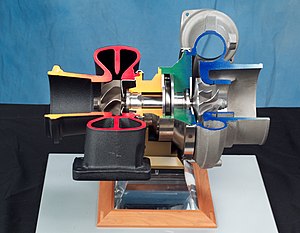 A turbocharger, colloquially known as a turbo, is a turbine-driven, forced induction device that increases an internal combustion engine's efficiency and power output by forcing extra compressed air into the combustion chamber.[1][2] This improvement over a naturally aspirated engine's power output is due to the fact that the compressor can force more air—and proportionately more fuel—into the combustion chamber than atmospheric pressure (and for that matter, ram air intakes) alone.

Manufacturers commonly use turbochargers in truck, car, train, aircraft, and construction-equipment engines. They are most often used with Otto cycle and Diesel cycle internal combustion engines.

traditional Forced Air Intakes have come in basically two different types-Turbochargers and Superchargers. Many different shapes, styles and varieties have been developed over the years, yet little has changed in their function.

Both Turbo and Superchargers are considered High Pressure Low Volume systems-they work by compressing air into the cylinders, either via a mechanical device (supercharger) or high speed turbine running off exhaust gas (turbo charging.)

These designs have a myriad of design problems and are expensive to install and maintain, often voiding the manufactures warranty.

Have you installed this on Cummins 6.7 turbo diesel? What were results?
Thanx
Ron

Yes, we have done some preliminary testing on diesels. The results are far better than expected. Most notable is reduction of turbo lag. Feels more like a normally aspirated engine when accelerated. There is an increase in boost pressure, a larger than expected fuel mileage improvement, reduced black smoke and reduction in EGTs, to name a few.

The 8.1 Chevys similar to the 6.0 liter engines. Reports have been given of 2-3 mpgs and of course bottom end pulling power. These motors seem to lack decent air into the intakes and it is vastly improved with the Venom2XS. I’m sorry, I don’t have dynos on every make and model, but enough have been done that I can say you will at least get about 20 more horse power and 50 lbs in torque. No guarantees, on those gains, since I don’t know about your gearing, tires sizes and all the variables. But it will be very noticeable.